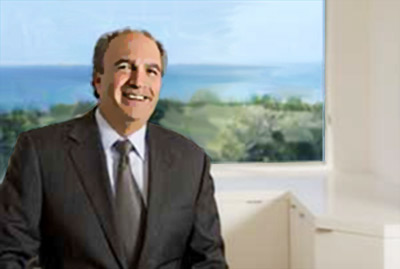 When the solution is obvious to Lee Stein, he acts. He doesn't just sit there; he does something about it, and he does it in a big way.

For example, when Stein and his wife of 34 years, June, tired of train horns blaring insistently past his Del Mar home office, signaling their approach to a railroad crossing, Stein started looking for an alternative. He researched federal railroad law, involved the city manager, the North County Transit Board and the Del Mar City Council, and formed a Quiet Zone Committee.

Before a year was up, the group had tested the viability of installing a quieter, stationary wayside horn that could be signaled remotely by an approaching train and was working on securing an exact cost estimate by mid-July.

Compared to some of Stein's other projects, however, the wayside horn -- although certainly of consequence to Del Mar's ocean-view residents -- seems to be small potatoes. Now in his mid-50s, Stein has moved through his career with a decisiveness and foresight that some would call almost prescient.

Educated as an accountant at Syracuse University and an attorney at Villanova University, Stein began his career as a Beverly Hills accountant to the stars, with a client list that included Journey, Men at Work, Gene Hackman, Matthew Broderick and Rod Stewart.

He then worked in real estate finance and development, investing in Seaport Village and developing the Ramada Main hotel at Disneyland -- and then selling his real estate interests before the market bottomed in 1990 to "retire" at 37. In 1993, within two days of being introduced to an Internet modem -- in a chance airport meeting with Internet pioneer Einar Stefferud -- Stein co-founded Internet commerce company First Virtual Holdings, which offered PayPal-like services before PayPal even existed. He eventually took First Virtual public and later sold the patents to eBay.

The Rancho Santa Fe resident shrugs it off, for the most part.

"I can see around corners," said the mild-mannered Stein, who seems to prefer multi-tasking to sleeping and says he tracks 172 blogs. "I've always had the ability to see things early. I don't know how to describe it better than that."

Today, Stein's focus is on environmentalism -- for its economic opportunities as well as its commitment to preserving the planet.

His latest creation, Prize Capital, aims to attract capital to fund green prize competitions. Contestants will develop technology that will solve the planet's problems and vie for a prize of $10 million in cash.

The contests are modeled on those run by the X Prize Foundation, which will facilitate some of Prize Capital's contests as well. X Prize Foundation is the nonprofit behind the Ansari X Prize that sent a three-passenger vehicle 100 kilometers into space twice within two weeks.

The first of Prize Capital's contests will focus on capturing carbon and recycling it -- "solving the coal problem," as Stein puts it, by turning carbon emissions "into an asset instead of a liability." Prize Capital will act as an incubator, providing office space, research labs and access to a stream of flue gas for experiments and research.

Flue gas is gas that is produced through the combustion of fuel. Prize Capital plans to partner with a Midwest power plant for the flue gas, Stein said.

The competition relieves both capital market and regulatory burdens, Stein said. Most investors are not prepared to fund ideas that are early stage and unproven, and Prize Capital will provide incentive as well as capital for research and development.

Also, regulators would probably be reluctant to approve an individual's request to use or create a flue gas source for experimentation. A large group and a prize competition are much harder to deny.

"Prizes have to get it done when there are other impediments," Stein said. "The great thing about the prize is that there are four or five different things that won't necessarily win the market share or win the prize, but the prize gives them publicity."

Stein has spent the last four years developing a risk mitigation strategy involving options and honing in on the contest theme of carbon capture and recycling. He recently secured a sponsor as well as funding, but declined to provide details as the agreement is still being finalized.

Stein expects to announce the specifics, including the contest rules, in December.

For Stein, his work in the environmental space is obvious, even logical. There are business opportunities and job creation opportunities in optimizing a reliable but inefficient energy system, Stein points out.

Beyond that, however, companies, individuals and governments need to start implementing industry "best practices" and take into account what Stein and others are calling "natural capital." An Earth depleted of its resources is not good for humanity, let alone business.

Stein, who tends to speak in stories and anecdotes, uses fishing as an example: Going fishing and selling the fish creates economic growth. Fishing to maximize growth kills off the natural capital and halts growth entirely in the long term.

"I think anthropologists will find that our definition of GDP (gross domestic product) was improper," said Stein, who terms the present time a "resource depletion age." "We have dead zones (of ocean) around the planet. Why do we tolerate one square foot of dead space? I don't understand."

Outside of the prize competitions, Prize Capital is also working to promote sustainable business -- such as ecotourism -- on the Osa Peninsula in Costa Rica, a country whose president has committed to making it a petroleum-free zone. Stein is often part of delegations supporting various environmental initiatives and speaks at events around the world.

Stein's foray into green projects began earlier in the decade, when he became active in trying to bridge the gap between business professionals and environmentalists. He co-founded the Southern California chapter of Environmental Entrepreneurs, or E2, and played a role in helping state Sen. Fran Pavley pass a "clean cars bill" that would aim to reduce greenhouse gas emissions from passenger vehicles.

"You have a lot of people who do not talk to each other. I like to get them around the table and help them find a solution," Stein said. "The easiest way to find consensus is to get people talking to each other."

Those who know Stein well or who have worked with him say he has an uncanny ability to make connections between seemingly disparate ideas and bring talented people together to work toward a common end.

"When I think of Lee, the word that always comes to mind is 'Rolodex,'" said Bob Epstein, who sat on the board of First Virtual in the mid-1990s and is the co-founder of E2 and a green bank in San Francisco. "He's the master of maintaining relationships and knowing when to use them."

Stein agrees that he's not afraid to "cross-pollinate" between different groups of people. His early experience solving a myriad of problems for rock stars helped him become a "general contractor of special services," Stein quipped.

He admitted his approach has only gotten better with time. He is far more process-oriented; he has a handbook for his administrative assistant. He likes to "build concentric circles" when solving a problem: Stein starts with a core group and then reaches out to include more and more people to achieve the best solution.

The event that changed Stein's life, however, was when he learned at 37 that he had an inoperable cerebral aneurysm, in which an artery in the brain swells due to weakening in the vessel walls. Stein had an 85 percent chance of dying or having a stroke at any moment. The aneurysm inexplicably healed, but the situation forced Stein to re-evaluate how he spent his time.

"It was the ultimate concept of living in the moment," Stein said. "I wouldn't wish it on anybody, but it was life-defining."

So, where will Stein spend his time next? He sees wireless health as an exciting opportunity, but says he prefers to be "monogamous" in his projects. Whatever the case, Stein is sure that his insatiable curiosity will lead him to new ideas, information and people, and his need to improve upon the status quo will see him offering up another solution once again.